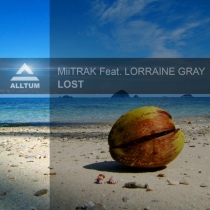 MiiTRAK is a producer/engineer from the UK. He has enjoyed success under several guises by having tracks chart in the Top 100, appear on various albums and receive airplay from ‘A-listers’ across the globe. Although producing & engineering for himself and others has always taken priority, he has also been fortunate enough to play alongside the likes of W&W for example.

For this summerish ibiza style track he teamed again up with Lorraine Gray. She is no stranger in the scene anymore with more than 20 releases. Lost is a reflection of the journey from darkness into a lighter and happier place. Lorraine and Miitrak allready worked together earlier in their career on the track Rising which allready got supported by Judge Jules and Simon Patterson.