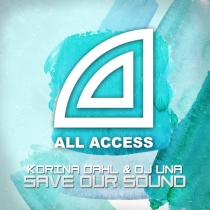 Having already established themeselves as international DJ’s over the last few years, Korina Dahl and DJ Una introduces their debut release on All Access.

‘Save Our Sound’ is a big-room track that is sure to light up clubs and festivals around the world with its melodic riff and hard hitting drop. The release contains also 2 massive remixes by Francesco Sambero & Saragn. The remix by Francesco is more progressive house minded while Saragn made a true Tech Trance monster.

Korina Dahl is touted as being one of the rising stars in the EDM DJ circuit, having rocked everything from the world famous Playboy Mansion, to events with Grammy Winning Producer/DJ’s such as Poet Name Life (Black Eyed Peas) sharing the stage with the likes of Bone Thugs N Harmony, Sasha Grey and Kardinal Offishall, as well as headlining her own ‘Tropical Bliss’ tour of Asia.

The road to Korina’s musical career started at an early age, as a child she used to spend time recording home radio shows, mixtapes, and experimenting with various musical instruments. Years later when she became active in Toronto’s burgeoning rave and club scene, Korina rediscovered her love of music. She quickly learned the ins and outs of mixing vinyl and no sooner had she finished her first demo, than she was discovered and signed to an LA based artist management company that represented several major actresses, models and of course, DJ’s.

In only a few short years her in-demand talent has made a splash on the nightlife scene, headlining all over the world, leaving hundreds of cities in over a dozen countries begging for more .

Her ever evolving style straddles a variety of genres including Progressive House, Electro House, Trance and Big Room EDM. This versatile approach, along with her infectious positive energy has earned her the adoration of everyone from underground to mainstream crowds alike. When she’s not throwing down on the wheels of steel, she pursues other passions as an up and coming model and producer.

On the modelling front, Korina has already landed some of the most prestigious pictorials in the world including major magazines such as FHM, Maxim and Playboy. She has also appeared in various nightlife and DJ magazines around the globe.

She is currently collaborating with the renowned producer, Pierre Pienaar who has had a collection of TOP40 tracks in national charts, as well as several Beatport and iTunes Top100 originals and remixes. Under ‘Honour Kode’ they are combining their styles to create a unique dance music project that is sure to take the scene by storm.

DJ Una started her career in the entertainment industry from modelling, this finalist of MTV VJ Hunt has starred in many TV Movies before making her acting big break when starring in the hit movie ” Air Terjun Phuket” , already making it big in the acting scene, her passion for dance music took off when she was made the in house DJ for the #1 Music Show ” Dahsyat” , playing live in front of Nationwide audience every morning, while rocking the club all across Indonesia by night, sky rocketing her as one of Indonesia most sought after DJ’s.

She explores her musical vision flawlessly and show her class as one of the freshest DJ in Indonesia today, and masterfully grace the decks with a rockin performance and a strong persona, she is a guaranteed house rocker for dance floors worldwide.