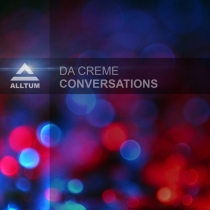 Da Creme is a Duo of 2 individuals based in South Africa. Lloyd being a DJ for over 16 years and Tommy Vuitton producing with both having tracks played worldwide. Their sound can be identified through their rolling basslines and natural melodic Rhodes type keys and stabs. Expect to see a whole lot more in the coming months from these guys.

For the remix we asked a guy from India known for his soothing story-telling sounds and beter known in the industry as Siddeffects, his remix is unique with its own cinematic texture, telling its own story.