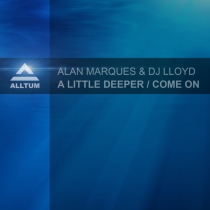 Alan Marques & DJ Lloyd both being household names in the Johannesburg scene.
Together they commence their first collaboration of what makes clubs tick locally.
Their deep bassline house sound and Melodic breaks show significantly in “Come On”
With almost 4 decades of DJing behind the belt combined there is definately more to come from them on the Alltum Label.

Besides the collaboration the release also contains the first solo release from Alan Marques on our label, a really cool deep uk sounding house track.

Alan Marques has been in the entertainment industry for well over 20 years.
He also has a degree in sound engineering and is also currently collaborating and producing singles with a top labels in the Netherlands.

Alan was also a resident on 5FM’s Erica Elle’s Studio 55. His own singles were also featured on top albums such as Truth, Lady Lea “Catch me if you can”, House Anthems and many more… DJing has always been his passion and he has continued to soar from strength to strength in the local scene especially being based in Johannesburg. With decades of experience you can notice the obvious class of skill he has to offer.

His energy and vibe is distinct combined with his vast experience from vinyl to digital.
Alan has a strong capability of combining today’s sounds and the Old School know how which makes him relevant for today’s market and the older generation of party go-ers.

Be sure to check out both tracks!